Water has a way of entering a basement through even the most unlikely of passages. Even if you go as far as sealing off your concrete walls and installing perimeter drains, you might find yourself dealing with a leak.

Your basement windows are one of the most common ways water can work its way into your basement. Fortunately, Regional Foundation & Crawl Space Repair has the tools and experience to solve the problem permanently.

The truth is that most basement windows are designed to use inexpensive steel or wood frames. Over time, these materials can break down, begin to rust or corrode, and general decay. As these materials decay, the panes and frames will hang more loosely, creating openings to the outside.

To fix leaking basement windows, we use the WellDuct® Basement Window System. With the WellDuct® system, flood water will be directed to the perimeter drain or dry well to prevent water from collecting in your basement. The installation is a four-step process.

First, we install a perimeter drain or dry well. We recommend directing water from the WellDuct® system to a French drain system. Alternatively, a small dry well can be created under any leaking windows.

Second, we’ll create a drainage channel. We’ll start by creating a small hole in the wall underneath the leaking window. If you have block walls, we can install a PVC pipe in the hole and install a grated opening outside of the pipe to prevent clogs. Then, we’ll inject a polymer around the edge of the pipe to seal it.

Lastly, we’ll seal the drain. The edges of the drain will be sealed with a polymer injection. 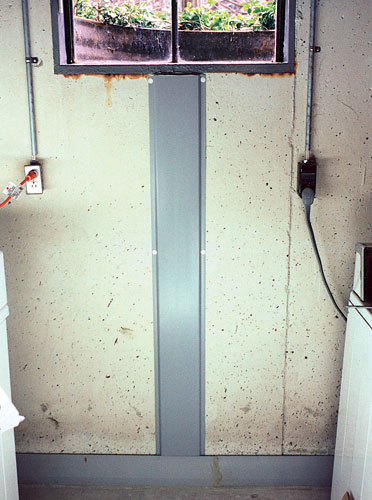